The Apple Lisa was a personal computer designed at Apple Computer, Inc. during the early 1980s. Officially, “Lisa” stood for “Local Integrated Software Architecture”, but it was also the name of Apple co-founder Steve Jobs’ daughter.

The Lisa project was started at Apple in 1978 and evolved into a project to design a powerful personal computer with a graphical user interface (GUI) that would be targeted toward business customers.

In September 1980, Steve Jobs was forced out of the Lisa project, so he joined the Macintosh project instead. Contrary to popular belief, the Macintosh is not a direct descendant of Lisa, although there are obvious similarities between the systems and the final revision, the Lisa 2/10, was modified and sold as the Macintosh XL.

The Lisa was a more advanced (and far more expensive) system than the Macintosh of that time in many respects, such as its inclusion of protected memory, cooperative multitasking, a generally more sophisticated hard disk based operating system, a built-in screensaver, an advanced calculator with a paper tape and RPN, support for up to 2 megabytes of RAM, expansion slots, and a larger higher resolution display. It would be many years before many of those features were implemented on the Macintosh platform. Protected memory, for instance, did not arrive until the Mac OS X operating system was released in 2001. The Macintosh, however, featured a faster 68000 processor (7.89 MHz) and sound. The complexity of the Lisa operating system and its programs taxed the 5 MHz Motorola 68000 microprocessor so that the system felt sluggish, particularly when scrolling in documents. 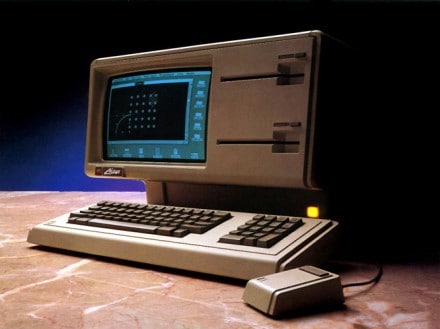 While the documentation shipped with the original Lisa only ever referred to it as The Lisa, officially, Apple stated that the name was an acronym for Local Integrated Software Architecture or “LISA”. Since Steve Jobs’ first daughter (born in 1978) was named Lisa Jobs, it is normally inferred that the name also had a personal association, and perhaps that the acronym was invented later to fit the name. Hertzfeld states that the acronym was reverse engineered from the name “Lisa” in autumn 1982 by the Apple marketing team, after they had hired a marketing consultancy firm to come up with names to replace “Lisa” and “Macintosh” (at the time considered by Rod Holt to be merely internal project codenames) and then rejected all of the suggestions. Privately, Hertzfeld and the other software developers used “Lisa: Invented Stupid Acronym”, a recursive backronym. It is also important to note that Lisa team member Larry Tesler’s daughter is named Lisa. 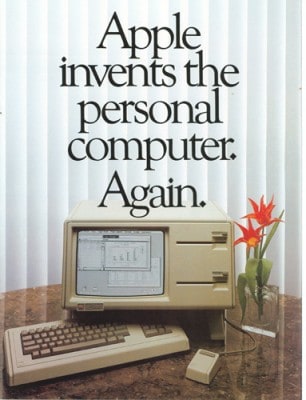 The original Lisa has two Apple FileWare 5¼ inch double-sided floppy disk drives, more commonly known by Apple’s internal code name for the drive, “Twiggy”. They have a capacity of approximately 871 kilobytes each, but required special diskettes. The drives have the reputation of not being reliable, so the Macintosh, which was originally designed to have a single Twiggy, was revised to use a Sony 400k microfloppy drive in January 1984. An optional external 5 MB or, later, a 10 MB Apple ProFile hard drive (originally designed for the Apple III) was also offered.

The first hardware revision, the Lisa 2, released in January 1984 priced between $3,495 and $5,495 US, was much less expensive than the original model and dropped the Twiggy floppy drives in favor of a single 400k Sony microfloppy. It was possible to purchase the Lisa 2 with a ProFile and with as little as 512k RAM. The final version of the Lisa available includes an optional 10 MB internal proprietary hard disk manufactured by Apple, known as the “Widget”. In 1984, at the same time the Macintosh was officially announced, Apple announced that it was providing free upgrades to the Lisa 2 to all Lisa 1 owners, by swapping the pair of Twiggy drives for a single 3½ inch drive, and updating the boot ROM and I/O ROM. In addition, a new front faceplate was included to accommodate the reconfigured floppy disk drive. With this change, the Lisa 2 had the notable distinction of introducing the new Apple inlaid logo, as well as the first Snow White design language features.

There were relatively few third-party hardware offerings for the Lisa, as compared to the earlier Apple II. AST offered a 1.5 MB memory board, which when combined with the standard Apple 512 KB memory board, expanded the Lisa to a total of 2 MB of memory, the maximum the MMU could address.

Late in the product life of the Lisa, there were third-party hard disk drives, SCSI controllers, and double-sided 3½ inch floppy-disk upgrades. Unlike the Macintosh, the Lisa features expansion slots. It is an “open system” like the Apple II.

The Lisa 2 motherboard is a very basic backplane with virtually no electronic components, but plenty of edge connector sockets/slots. There are 2 RAM slots, 1 CPU slot & 1 I/O slot all in parallel placement to each other. At the other end, there are 3 ‘Lisa’ slots, parallel to each other. This flexibility provides the potential for a developer to create a replacement for the CPU ‘card’ to upgrade the Lisa to run a newer CPU, albeit with potential limitations from other parts of the system.

The Lisa operating system features cooperative (non-preemptive) multitasking and virtual memory, then extremely advanced features for a personal computer. The use of virtual memory coupled with a fairly slow disk system makes the system performance seem sluggish at times.

Based in part on advanced elements from the failed Apple III SOS operating system released 3 years earlier, the Lisa also organized its files in hierarchal directories, making the use of large hard drives practical. The Macintosh would eventually adopt this disk organizational design as well for its HFS filing system. Conceptually, the Lisa resembles the Xerox Star in the sense that it was envisioned as an office computing system; consequently, Lisa has two main user modes: the Lisa Office System and the Workshop. The Lisa Office System is the GUI environment for end users. The Workshop is a program development environment, and is almost entirely text-based, though it uses a GUI text editor. The Lisa Office System was eventually renamed “7/7”, in reference to the seven supplied application programs: LisaWrite, LisaCalc, LisaDraw, LisaGraph, LisaProject, LisaList, and LisaTerminal.

A significant impediment to third-party software on the Lisa was the fact that, when first launched, the Lisa Office System could not be used to write programs for itself: a separate development OS was required called Lisa Workshop. An engineer runs the two OSes in a dual-boot config, writing and compiling code on one machine and testing it on the other. Later, the same Lisa Workshop was used to develop software for the Macintosh. After a few years, Macintosh-native development system was developed. For most of its lifetime, the Lisa never went beyond the original seven applications that Apple had deemed enough to do “everything.”

In April 1984, following the success of the Macintosh, Apple introduced MacWorks, a software emulation environment which allowed the Lisa to run Macintosh System software and applications. MacWorks helped make the Lisa more attractive to potential customers, but did not enable the Macintosh emulation to access the hard disk until September. In January 1985, re-branded MacWorks XL, it became the primary system application designed to turn the Lisa into the Macintosh XL.

Business blunder
The Apple Lisa turned out to be a commercial failure for Apple, the largest since the Apple III disaster of 1980. The intended business computing customers balked at Lisa’s high price and largely opted to run less expensive IBM PCs, which were already beginning to dominate business desktop computing. The largest Lisa customer was NASA, which used LisaProject for project management and which was faced with significant problems when the Lisa was discontinued.

The Lisa is also seen as being a bit slow in spite of its innovative interface. The release of the Apple Macintosh in 1984, which received far better marketing, was the most significant factor in the Lisa’s demise. The Macintosh appeared, on the surface due to its GUI and mouse, to be a wholesale improvement and was far less expensive. Two later Lisa models were released (the Lisa 2 and its Mac ROM-enabled sibling Macintosh XL) before the Lisa line was discontinued in April 1985. In 1986, Apple offered all Lisa/XL owners the opportunity to turn in their computer and along with US$1,498.00, would receive a Macintosh Plus and Hard Disk 20 (a US$4,098.00 value at the time).

TV spot for the Apple Lisa

This article is published under the GNU General Public License