Apple Campaign "Get a Mac" 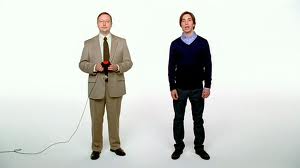 Tree Trimming – A holiday animated Get a Mac commercial. Mac and PC set aside their disagreements and decide to trim a Christmas tree by hanging ornaments and stringing lights. Mac tells PC that they are good friends while PC gets nervous. When they are finished, PC does not want to light the lights on the tree. Mac persuades him to do so. PC plugs the trees lights in and they light up and say: “PC RULES”. He apologies to Mac and says that it just sort of happened. The animation is like the Get a Mac Santa Claus ad in Rankin/Bass clay animation style.

I Can Do Anything – A holiday animated Get a Mac commercial. PC asks Mac why he loves the holidays so much. Mac says it is the season for Peace on Earth. PC says that they get to be animated and they can do anything. PC demonstrates by floating in the air, building a snowman in fast motion, and talking to animals. PC asks a bunny hopping by where he is going. The bunny replies by saying he’s going to the Apple Store for some last minute gifts. PC then purposely tips the snowman’s head off making it fall on the bunny and apologies. The animation is like the Get a Mac Santa Claus ad in Rankin/Bass clay animation style.

Time Traveler—PC uses a time machine to travel to the year 2150 to see if any major issues (such as freezing and crashing) have been removed from the PC and to see if PCs are as hassle-free as Macs. Promptly after PC arrives at 2150, future PC literally freezes, which answers the question.

Stacks—PC is searching through all of his pictures, trying to find a photograph of his friend. He searches one picture at a time, but Mac states that iPhoto has a feature called Faces, in which you tag the face of a person and iPhoto finds other pictures of the same person, putting them all into the same folder and saving search time. PC responds to the facial-recognition technology as expensive and tells Mac to sort the pictures instead because he has the technology to make it easier.

Legal Copy—Every time PC says something positive about himself, the legal copy that appears on the screen increases. He finally states that PCs are now 100% trouble-free, and the legal copy covers the whole screen.

Biohazard Suit—PC first appears wearing a biohazard suit to protect himself from PC viruses and malware, of which PC says there are 20,000 discovered every day. Mac asks PC if he is going to live in the suit for the rest of his life, and PC cannot hear him because he is too protected by his virus-proof mask, and takes it off. PC then shrieks and struggles to place it on again.

Elimination—PC attempts to find Megan, a new laptop hunter, the perfect PC. Unfortunately, no PCs are ‘immune’ to viruses, which is Megan’s #1 concern, so PC leaves her with Mac.

PC Choice Chat—PC has his own radio talk show called PC Choice Chat, and people begin to call in asking for advice on which computer to get. All the callers ask for advice on a computer that would qualify as a Mac but not a PC, as one caller asks for a computer that is for people who hate getting viruses. One other caller asks for PC help like Mac genius, and another wants to switch to Mac. PC ignores these calls.

Customer Care—Mac is seen again with an Apple Genius, a real-life person who can help you with your Mac problems. PC then has a short montage of endless automated customer-support messages, never reaching a real person, which is not to PC’s liking, and he then says that his source of help is ‘the same’ as Mac Genius.

Surprise—Mac appears alongside a customer (Andree Vermeulen), with PC notably absent. The customer says she’s looking to buy a great computer. Mac tries to convince her that she should get a PC, telling her that they’re much better and more stable. The customer seems skeptical, tells Mac she’ll “think about it”, and leaves. A frustrated Mac pulls off a mask and his clothes, revealing himself to be PC in disguise. The real Mac then appears, sees PC’s discarded mask and clothes, and says “I don’t even wanna ask.”

Top of the Line—PC and Mac appear with a customer who’s looking for a new computer. PC introduces her to the “top of the line” PC (Patrick Warburton), a handsome and overly slick PC in a suit. She asks him about screen size and speed, to which Top of the Line says he’s the best, but he then balks when she says she doesn’t want to deal with any viruses or hassle. She decides to go with Mac, so Top of the Line hands her his business card and tells her to give him a call “when she’s ready to compromise.”

Trainer—The commercial starts off traditionally, but PC is doing sit-ups with a trainer in a striped shirt (Robert Loggia), saying fierce things to make PC improved. PC suggests the trainer try some ‘positive reinforcement’, and is a little angry and shocked when the trainer compliments Mac instead.

PC Innovations Lab—PC, who has wrapped another PC in Bubble Wrap, is saying that the Bubble Wrap is actually a security shield. Mac tries to speak, but PC cuts him off, showing another PC who apparently has cupholders on his shoulders. The cupholders are full of foam coffee cups, and PC takes a full coffee cup, pretending to toast the cup and saying, “Cheers to innovation”.

Broken Promises—PC tells Mac how excited he is about the launch of Windows 7 and assures him it won’t have the same problems as Vista. However, Mac feels like he heard this before, and has a series of flashbacks about PC assuring Mac about Windows Vista, XP, Me, 98, 95, and 2.0. On the last flashback, he says “Trust me.” Back in the present, he says this time it’s going to be different, then says “Trust me.” in an almost identical way to the flashback.

Teeter Tottering—A woman who had a PC has a box of things that were in her PC and says she’s switching to Mac, but PC tries to convince her to stay while she just goes over to Mac every time.

PC News—PC is sitting at a news desk and turns it over to a correspondent at what seems to be a launch party for Windows 7 until a person being interviewed reveals that he is switching to a Mac. PC is surprised by this and asks why, and more people speak of how Mac is #1 with customer satisfaction and PC finally says to cut the feed. This is one of two commercials where Mac and PC acknowledge that they are in a commercial. PC: “Let’s go to a commercial.” Mac: “We are a commercial”. PC: “Let’s go to another commercial”.

This article is published under the GNU General Public License