Home The Wizards behind the Macintosh

The Wizards behind the Macintosh

The making of Macintosh – An Interview with The Macintosh Design Team (Byte – Feb, 1984)

Bill Atkinson nearly had his Ph.D. in neurochemistry before he admitted to himself that his real love was computers. He “got a quick E.E.” and started his own company. He was happily minding his own business when his friend ]eff Raskin asked him to come see what was happening at Apple, which was then six months old. Bill wasn’t really interested, but airplane tickets showed up in the mail, so he took a look. What he saw was “several years reaching into the future” of anything he could do where he was. He stayed to write Apple’s Pascal and later became Mr. User Interface for Lisa before he moved over to the Mac team.

Andy Hertzfeld says, “The Apple II changed my life.” The computer people at Berkeley were a little narrow-minded about letting a grad student really get into the computer as Andy wanted to. So he spent nearly all the money he had in the world on an Apple II and had a computer he could control completely. He decided the Apple was more interesting than his classes and began writing programs for magazines. When Apple bought one of Andy’s programs, Steve Jobs offered him a job, which he took when he finished school. He worked on silent-type printers and Apple III demos until a shake-up in his part of the company shook him loose. He looked around and decided to go with Mac.

Larry Kenyon arrived at Apple from Amdahl with a double degree in psychology and computer science. He was working on Apple III products when the same shake-up that shook Andy loose freed him, too. Andy asked Larry to join the Mac crew because he was one of the few people who understood the arcane art of making the Apple II work with printer peripherals, and anybody who can do that has to be good. No one in the company really believed that Mac was a product when Larry joined the Mac team. It was just a research effort, and there was some risk involved: would you still have your job in a few months?

Joanna Hoffman is still on leave from her Ph.D. program in archaeology at the University of Chicago. She has a background in anthropology, physics, and linguistics. She came to Apple because of Mac. After using her computer skills in the field of archaeology for so long, she was tired of looking at the past and turned to the future. She was Mac’s entire marketing department for more than a year. She wants to make Mac a tool that feels natural for international users by making it speak their languages.

Burrell Carver Smith encountered the Homebrew Computer Club in 1975, got hooked on microprocessors, and moved to the Bay Area. Just riding around in a borrowed truck one day, he saw Apple and decided to drop in. The only job Apple had available was in the service department, repairing Apple IIs. He took the job and fixed at least a thousand Apple II boards and got involved in other projects before Jeff Raskin and Bill Atkinson recruited him for Mac. He talked the Lisa engineers out of some chips and stuff and got a prototype running over Christmas 1979. He was the first full-time Mac person after Jeff Raskin. 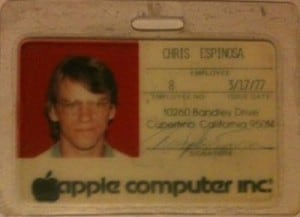 Chris Espinosa says, There was no life before Apple.” At 13 years old he could be found cruising up and down the bus line in his home town, spending a few hours at each Byte Shop on the line until the owner threw him out. He discovered the way to keep from getting thrown out was to write demo programs for the machines, so he wrote for whatever was lying around: ”Altairs, IMSAIs, or this weird new machine called Apple I. His mom worried when he was offered a ride to the Homebrew Computer Club meeting with two scruffy characters named Jobs and Wozniak, but she gave in, and the rest is history. Chris spent a Christmas vacation debugging Apple’s BASIC in exchange for a whole row of 4K-byte RAM chips, which he thought was a pretty good deal. He worked part-time during college writing BASIC programs and reference manuals and signed on full-time when he graduated. He likes being in on the design process: ”If the machine is designed right in the first place, you don’t have to write a lot about it.”

Jerrold C. Manock was a freelance product-design consultant with a Stanford education who finally joined Apple when he saw that three-quarters of his billing was to Apple anyway. He worked on the Apple II, the Disk II, the III, and Lisa before designing Mac. In Macintosh, he says, “The outside matches the inside in elegant simplicity.”

Bruce Horn grew up at Xerox PARC, much the same way Chris grew up at Apple, and later attended Stanford. Bruce started working at Xerox when he was 14 years old: he was one of the kids Xerox brought in to test Smalltalk. Turns out he was brighter than most and became a systems wizard who actually implemented Smalltalk on a variety of different processors. Bruce is all of 23 years old now, but he spent seven years at Xerox PARC and brought Apple that perspective.

George Crowe and David Egner designed the analog board in the Macintosh.